Skip to content
Home
Should Uber Be Doing More To Protect Its Drivers?

Should Uber Be Doing More To Protect Its Drivers?

A few weekends ago, an Orange County Uber driver named Edward Caban released a now viral video on Youtube that depicted a scary confrontation between himself and his passenger, Benjamin Golden.  In a little less than a week, the video has garnered over 2 million views and raised serious questions about driver safety.

The video itself depicts a drunk Golden, unable to sit up straight or give directions to the driver, turn violent when Caban demands that he exit the vehicle.  The video was recorded by the driver’s dash cam and it ends with the intoxicated Golden being pepper sprayed by Caban.

Golden was arrested at the scene and his charges were upgraded the day after to four misdemeanors according to the Orange County DA’s office.  He was also fired from his position as a Taco Bell executive and will likely have trouble finding work for the rest of his life.

For Uber drivers across the country, the first couple minutes of this video were nothing out of the ordinary.  We’ve all had passengers who were too drunk to enter their destination or unable to give accurate directions, but rarely have things turned violent.

In fact, with over 1 million trips per day, most of the newsworthy incidents regarding Uber usually have to do with passenger safety.  Recently, an Uber driver in India was sentenced to life in prison for raping a female passenger and there are countless other horror stories in which drivers are most often the perpetrators.  But this is one of the first well publicized cases we’ve seen where the driver was actually the victim instead of the passenger.

Was It Just A Matter Of Time?

Drivers have been dealing with drunk passengers since Uber’s early days and it’s common knowledge that the ‘Party Hours’, typically Friday and Saturday evenings, are when it’s busiest but also when you get the highest number of intoxicated passengers.

I like to tell drivers on my site, that a good beginner strategy is to just ‘Follow The Alcohol’ since even Uber promotes its platform as the safer alternative to drinking and driving.  And it’s no different on holiday weekends like Halloween when this incident occurred.

Here’s a chart that Uber sent to my driver account a few days before Halloween weekend. 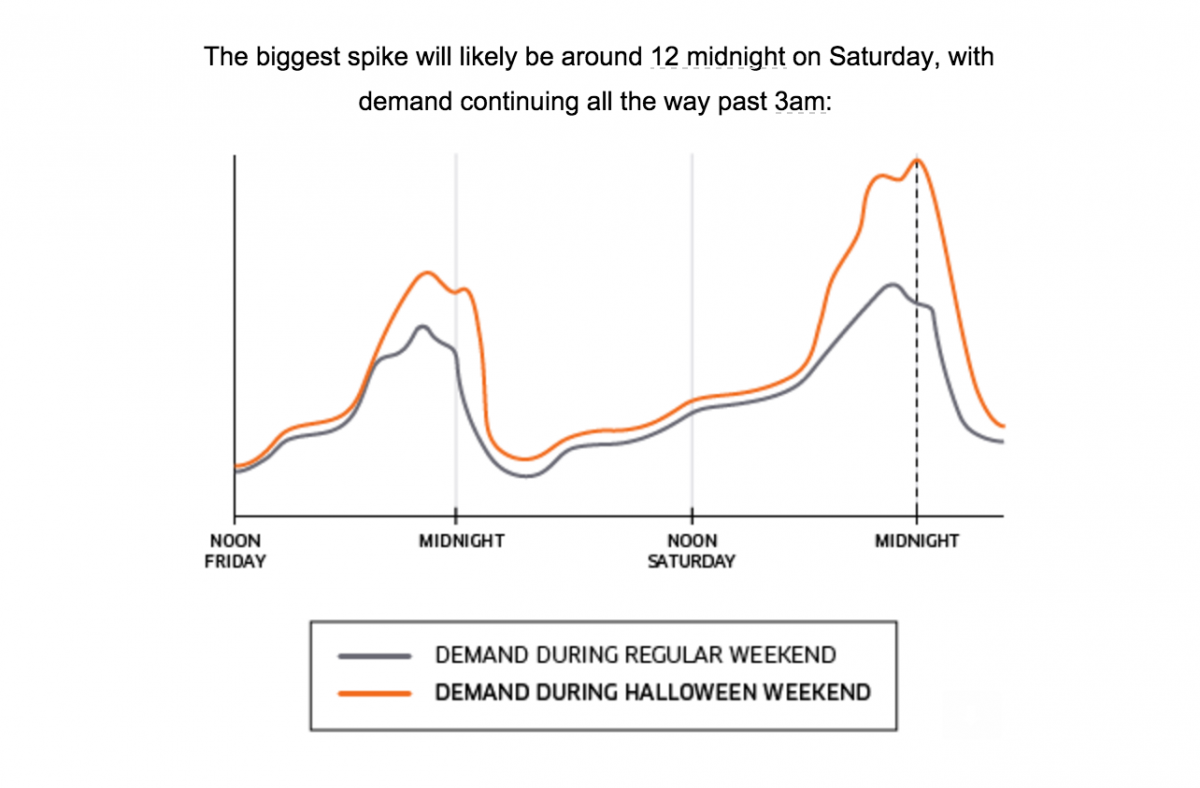 You can see from the chart above that demand is at its highest when people have had a full night of drinking and partying and are just about ready to start heading home.  Now, dealing with drunks isn’t the sexiest part about being an Uber driver but it is usually when you’ll make the most amount of money.  Uber’s surge pricing encourages drivers to come out on the road during these times and that increased pay can make up for having to deal with these unruly passengers.

But drivers have always had a lot of concerns in regards to driving during this time.  There are some drivers who flat out refuse to drive nights and others do it begrudgingly.

Should Uber Do More?

Unfortunately for drivers, Uber has a history of providing the bare minimum when it comes to what’s required by the law.  So whether we’re talking rideshare insurance, background checks or safety issues, Uber has deferred a lot of the risk of driving and owning a business to its independent contractors.

And this case is no different.  I’ve spoken with hundreds of drivers about this particular incident over the past few days and this video has really struck a nerve with a lot of them because it’s brought to light the real risks of being an Uber driver.  Uber is starting to look more than ever like a glorified taxi service with a fancy app and that can be problematic for a couple reasons.

Driving A Taxi Is Dangerous

There’s a reason why driving a taxi consistently ranks on top ten list for the most dangerous jobs.  And if you couldn’t tell from the plexiglass screen that sits in-between you and your taxi driver, a report from OSHA released in the year 2000 found that taxi drivers are 60 times more likely than other workers to be murdered on the job.

Out of the ten recommendations pulled straight from the OSHA report, Uber provides only three of these features on their platform.  Everything that you see in bold is currently not in place for Uber drivers and remember, this report was released in the year 2000, so it’s not exactly breaking news.

This driver in this incident was actually pretty well prepared though with a dash cam and pepper spray.  Unfortunately, most Uber drivers haven’t even considered this kind of stuff until now.

In the days following the incident, I’ve fielded hundreds of inquiries from drivers about dash cams and whether or not they should be carrying non-lethal weapons.  Nowhere in Uber’s lackluster training material does it mention the word dash cam and here’s the response I got from Uber’s customer support team when asking if I, as a driver, could carry non-lethal weapons while I’m driving. 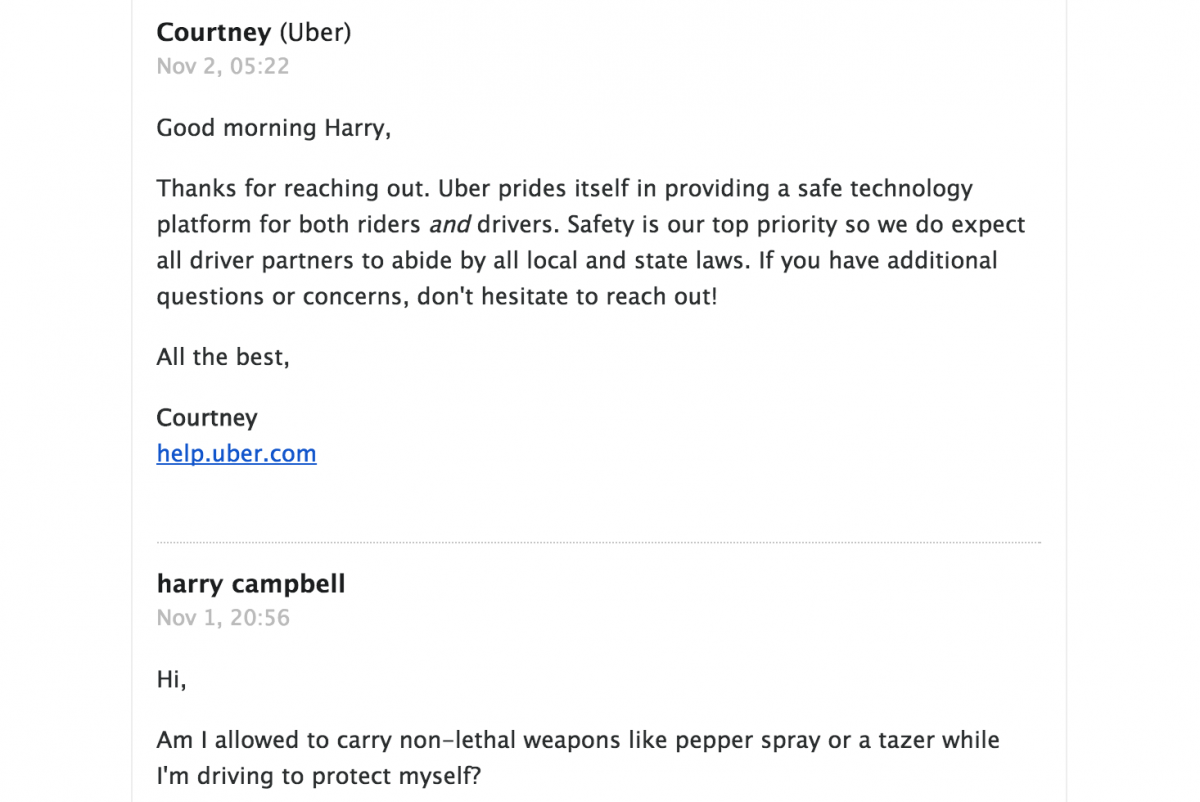 This e-mail is a microcosm of the training and support that Uber drivers get on the job.  Their questions are often met with frustrating responses and Uber rarely provides any sort of real guidance or help.  It’s one of the reasons that drivers turn to third party resources like my own blog to get help and real-life advice.

When you think about Uber’s slogan, “Everybody’s Private Driver”, the image you conjure up in your head probably doesn’t involve plexiglass screens, dash cams and pepper spray.  But maybe it should.

Uber and competitors like Lyft were built on the idea that normal every day people could drive to make a little extra cash in their spare time.  Uber’s public policy strategist, David Plouffe, recently touted the fact that of the 400,000 Uber drivers nationwide, more than 50% of them drive less than 10 hours per week, which would seem to corroborate that narrative.

But as Uber has expanded beyond the tech savvy millennial demographic and eroded the taxi industry’s market share, it’s passenger base has started to encompass that very same group that makes driving a taxi so dangerous.  The fact that a majority of Uber drivers drive less than 10 hours per week is actually a really bad thing when it comes to safety since it means they are less adequately prepared to handle these types of situations.

In the days after this event, I heard from many taxi drivers who told me, this Uber driver handled this situation very poorly.  And while there’s obviously no excuse for the violence perpetrated by Golden, it’s possible that this situation could have easily been prevented with any single one of the numerous recommendations from that 15 year old OSHA report.

Even the most basic of real-time support systems like an emergency phone line that Uber drivers can call would make things safer for drivers.  As it stands today, there’s actually no way for Uber drivers to contact Uber in real-time while they’re out driving.  They’re asked to e-mail in about any problems they have with a specific passenger or ride, which seems almost ridiculous for a $50 billion company.

Uber has reacted to this incident the way you’d expect, releasing an official statement that said, “We’ve been in contact with Mr. Caban and are thankful he is doing ok. We will provide any information to the investigating authorities as needed. The rider involved in this incident has been permanently banned from the platform.”

But the real question is, is this enough?  According to Plouffe, Uber is ‘creating jobs’ at a breakneck pace but they still aren’t required to provide things like adequate safety training or worker protections to its drivers.  Passengers may have questioned Uber’s safety practices in the past, but now, a lot of Uber drivers are starting to wonder the same thing.