Skip to content
Home
Do You Tip Your Uber Driver?

Do You Tip Your Uber Driver? Uber has been making headlines recently for settling a class action lawsuit brought forth by Uber’s very own drivers. The claim was based on unfair wage and labor practices, and Uber ended up paying for it to the tune of $100 million dollars. Additionally, and perhaps more importantly, the settlement also demanded that Uber clarify their stance on tipping, or in other words give drivers the go ahead to solicit tips. This is where things get interesting.

For those of you who are familiar with the rideshare giant, you may understand why this is a surprising move by Uber. For years now, Uber has been conditioning their riders – and the general public – to forget about tips. According to Uber, tipping was never part of their business plan and in a recent blog post, the company stated, “When we started Uber six years ago, we thought long and hard about whether to build a tipping option into the app. In the end, we decided against including one because we felt it would be better for riders and drivers to know for sure what they would pay or earn on each trip  —  without the uncertainty of tipping. That’s still the case today. Tipping is not included, nor is it expected or required.”

So on one hand Uber is telling the general public (through their settlement) that they will now allow drivers to solicit tips, yet on the other hand they are still stating that “Tipping is not included, nor is it expected or required.”. Furthermore, Uber wont be introducing a way for passengers to tip via the app, meaning those riders who wish to tip will have to carry good old fashioned cash.

Clearly, Uber’s faux pas stance on tipping is confusing! In order to bring some clarity to the situation, we asked our readers to participate in a poll titled “Do You Tip Your Uber Driver?” and we got an overwhelming number of responses.

So far we have received 138 responses from our readers regarding the question, “Do You Tip Your Uber Driver?” and here is how the results played out. 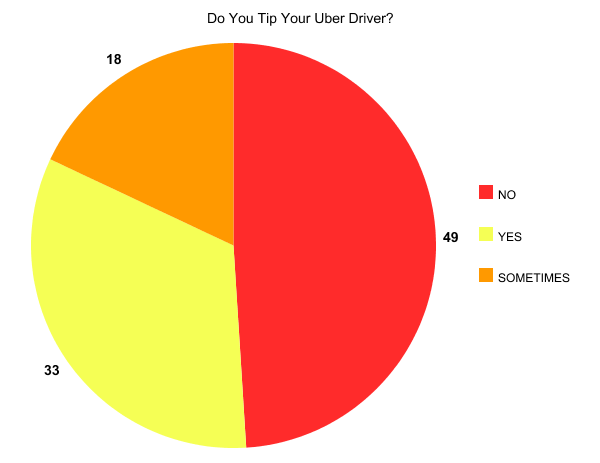 49% of participants stated NO, 33% stated YES, and 18% stated SOMETIMES. Seems like the public is pretty fairly divided on whether or not you are supposed to tip your Uber driver, furthering the point that Uber’s tipping stance is just downright confusing.

This seems, to us, to give Uber’s rival Lyft a pretty distinct advantage, as Lyft has always included an in-app tipping feature, making it clear to riders that they can add a few extra dollars if they wish. This simple show of a confidence on tipping procedure could end up pulling some customers away from the rideshare giant Uber, and garner the underdog Lyft some momentum within the industry. It will certainly be interesting to see!